Why Are You Allergic?

Allergy and Asthma Clinic of Central Texas Contents Allergy Info Why Are You Allergic? 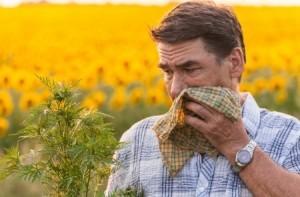 Allergic reactions are inappropriate, overblown responses mounted by the body’s immune system against a harmless substance — take ragweed pollen, for example. Ragweed pollen is not poisonous, infectious, or in any way harmful to humans. But in some people it triggers an attack by immune system cells that takes the form of an allergic reaction. When this happens, the ragweed pollen — or any offending substance — is called an allergen.

You develop allergies for two reasons: First, you are genetically predisposed to be allergic; second, factors in your environment, especially when you are young, make you more susceptible. Most allergies are caused by some combination of genetics and environment.

While many people suffer from allergies, others don’t. If you’re one of the unlucky ones, blame your parents. Scientists now know that many people have a genetic predisposition to be allergic. For instance, a child with one parent who has allergies has a 50% risk of developing allergies. And this risk increases to 70% if both the child’s parents are allergy sufferers.

Someone with a genetic predisposition to allergies is said to be atopic , and more likely to suffer from childhood atopic dermatitis (eczema), atopic rhinitis, and atopic asthma. Atopic allergies typically first appear in very young children with the signature itchy, red rash of eczema. These children may go on to develop the sneezing, runny nose, and congestion of atopic rhinitis (sinus symptoms) around year one or two. And many then go on to develop atopic asthma (lung symptoms) by age five or six. Unfortunately, unlike early allergies to certain foods, there’s little likelihood of outgrowing these particular allergies. Consequently, people who are atopic are typically afflicted with more than one type of allergy throughout their lives. Atopic diseases are often referred to as allergic diseases.
What’s in a name?

Allergy and atopy are not synonymous. Allergy describes an individual’s hypersensitivity to an allergen upon a second or subsequent exposure after an uneventful initial exposure, meaning you’ll get away with it the first time but not the second. Atopy means you are genetically predisposed to be allergic to certain allergens from the start. People who are atopic have a predisposition to allergic reactions. But keep in mind, a predisposition isn’t an automatic sentence. You may be one of the lucky ones who has a genetic predisposition, but — for whatever reason — doesn’t go on to develop allergies. The reverse is also true: You may not be genetically predisposed, yet develop allergies anyway.

Genes are not the whole story, because genes alone are not enough to give you allergies. The circumstances of your early childhood apparently influence how likely you are to develop allergies. For instance, if you have siblings, your place in the birth order matters. It may seem surprising, but children who have three or more older brothers or sisters are less likely to develop allergies than siblings born earlier. Scientists think that if you are not the first born, you are, by definition, more exposed to germs generously passed around by your older siblings. Exposure to a wider array of germs early in life may dampen the body’s tendency to turn on the allergic response. Similarly, children in day care, who are exposed to germs as they come in contact with many other children, seem less likely to develop asthma. Breast-feeding also provides some protection against developing allergies.
Early exposure to germs

Why are allergic reactions on the rise in Western industrialized countries? There are several theories, but many experts view the increase in allergies as the price of success. Modern plumbing, cleaner homes, and the introduction of antibiotics have caused a drop in childhood diseases over the last century or so. This drop has meant that children’s immune systems aren’t exposed to as many germs as were those of children from earlier eras or who lived in less sanitary conditions in less developed countries. And without sufficient exposure to these “bad guys” in early childhood, certain components of the immune system fail to learn their job properly, with the result that a type of immune system cell involved in the allergic response begins to dominate.

This theory that allergies result from reduced exposure to bad germs in early childhood has come to be known as the hygiene hypothesis. The idea stems in part from the work of researchers who have been studying young children who live on farms in Austria, Germany, and Switzerland. Surprisingly, they have found that children who grow up in close proximity to farm animals and barns have less hay fever and allergic asthma than non-farm children from the same rural environment. It seems that these farm children better tolerate allergens in their environments after their early long-term exposure to farmyard muck and unpasteurized farm milk. The reason may be that certain endotoxins — the chemicals on the walls of common bacteria in the farmyard muck — stimulate the development of the children’s immune systems. Still, animal dirt is filled with infectious microbes, so researchers don’t advocate that parents expose their young children to it.

Another example of the effects of cleanliness and access to antibiotics in early childhood was seen in German children after the reunification of East and West Germany. Researchers found that seasonal hay fever and asthma were less common in children who had spent their early years in East Germany. After reunification and the rise in the standard of living in East Germany, hay fever increased among East German children. As with the life-on-the-farm example, researchers think the more sanitized Western lifestyle is responsible for the increase.
Early exposure to allergens

Another significant factor that may contribute to the development of allergies is early childhood exposure to certain allergens. For example, a study from England found that high levels of exposure to dust mites in early childhood in those whose parents had allergies (and who were therefore prone to develop allergies and asthma) meant an increased risk of developing asthma by age 11. On the other hand, one study suggested that this was not true for cat dander (dead skin debris). Indeed, the frequency of allergies was lower in those with a higher exposure to cat dander. Another study failed to confirm this result, and further research is needed in this area before doctors can make any recommendations regarding exposure to allergens in early childhood.
What’s in a name?

Any substance that provokes an immune system response — meaning the immune system summons its troops and engages in a fight to defeat what it considers to be a “nonself” invader — is called an antigen. When the result of the call to arms is an allergic reaction, the antigen is called an allergen.